Venues, dates and pools set for qualifying round of 2017 World Baseball Classic

World Baseball Classic, Inc. (WBCI) today announced the venues and pools for the Qualifying Round of the 2017 World Baseball Classic, the fourth installment of the baseball tournament featuring many of the world’s greatest players. The winners of each Qualifier will advance to compete in the 2017 World Baseball Classic. The four venues that have been selected to host a Qualifier are:
• Blacktown International Sportspark in Sydney, Australia;
• Estadio B Air in Mexicali, Mexico
• Rod Carew Stadium in Panama City, Panama; and
• MCU Park in Brooklyn, New York, United States
The World Baseball Classic is sanctioned by the World Baseball Softball Confederation (WBSC) as the sport’s official National Team World Championship.
Initial opening round match-ups (including home and visitor designations) as well as ticket information will be announced at a later date by the host venues. The pools for each Qualifier are as above.
“We are excited to return to Panama City for the 2016 Qualifying Round and to introduce the World Baseball Classic to three great new host venues in Mexicali, Sydney and Brooklyn,” said MLB Chief Operating Officer Tony Petitti. “We would like to thank these four host venues, the event organizers and the WBSC for their continued support and desire to grow the game of baseball around the globe.”
“The World Baseball Classic continues to grow in popularity and interest, and we look forward to launching the 2017 tournament with Qualifiers in four great locations around the world,” said Timothy Slavin, Chief of Business Affairs for the MLBPA. “We know that baseball fans in each of the Qualifier cities will be treated to an exceptional international baseball experience.”
“The WBSC thanks Major League Baseball, the Major League Baseball Players Association and all the stakeholders for uniting around the collective goal of globalizing our sport,” said WBSC President Riccardo Fraccari. “The World Baseball Classic provides 28 National Teams the exciting opportunity to compete against each other on baseball’s biggest global stage.”
The Qualifiers will feature a six-game, modified double-elimination format. The composition of the pools was determined after venues were selected, with consideration given to competitive balance, existing rivalries and each national team’s geographic location.
The teams selected to participate in the Qualifiers will include the four World Baseball Classic teams from the 2013 tournament that finished in last place in their respective pool during the opening round – Australia, Brazil, Mexico and Spain.
The winners from each Qualifier will advance to the World Baseball Classic tournament, scheduled for March 2017. Those four teams will join the 12 countries – Canada, China, Chinese Taipei, Cuba, Dominican Republic, Italy, Japan, Korea, Kingdom of the Netherlands, Puerto Rico, United States and Venezuela – that received automatic invitations based on their performance in the 2013 tournament.
The Qualifiers were originally introduced prior to the 2013 World Baseball Classic, when Qualifiers were held in Panama City; Regensburg, Germany; Jupiter, Florida; and Taipei, Taiwan during the fall of 2012. The inaugural World Baseball Classic was held in 2006 prior to ensuing editions in 2009 and 2013. 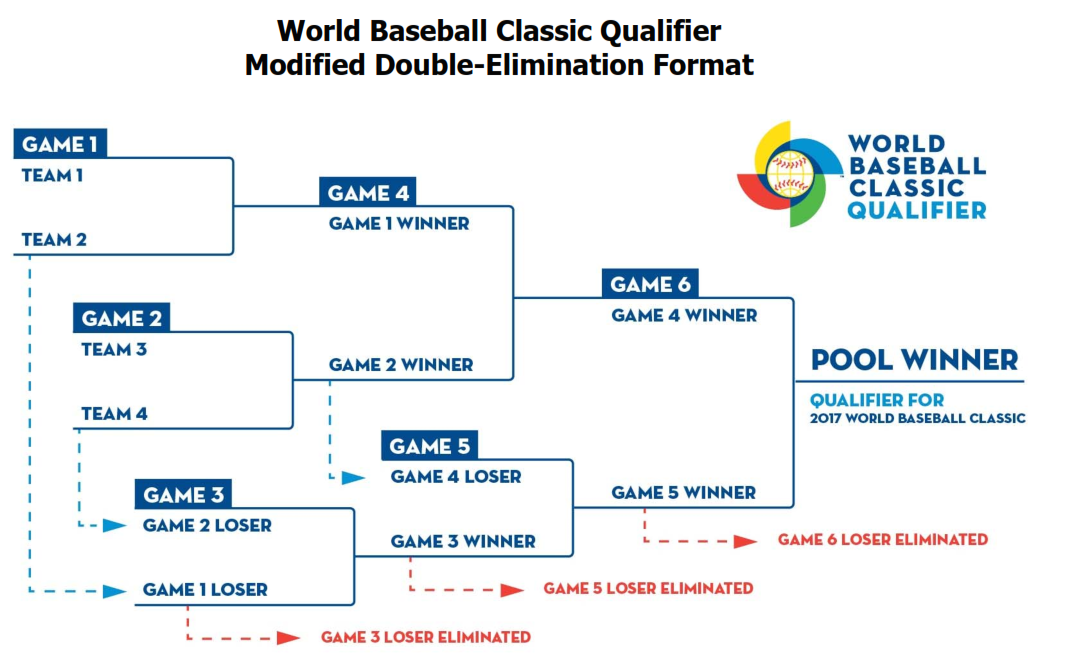