In total, 16 of the Samurai’s 24-man roster are currently with NPB clubs, including three players each from the famed Hokkaido Nippon Ham Fighers and the 2013 NPB champs, Rakuten Eagles. The remaining eight members of the Japanese National Team are from the highest ranks at the university level or are top prospects in the Industrial League.

NPB’s clubs celebrated and were honoured that their players were selected to represent their country and are among the best 21U players in Japan and in the world. The selection of their players is also a source of pride and validation for their respective scouting departments.

The Ham Fighters took to social media to help spread the announcement – posting the news on their website and to their 173k Facebook fans, generating over 9,000 likes and over 132 shares.

The Eagles tweeted and posted to their 150k Facebook fans that three of their players had been selected to represent Samurai Japan.

Samurai Leader Predicts Japan will be 21U World Champions

J-Sports, one of the largest sports TV networks in Japan, with a platform reaching out to 7 million households, has acquired the rights to broadcast all Samurai Japan’s games live, as well as across mobile and online platforms.

Japan will be in Group B and open the world championship versus No. 15 Australia on Friday, 7-November. The Aussies also recently announced their 21U National Team roster fill with Australia's best young pro players. 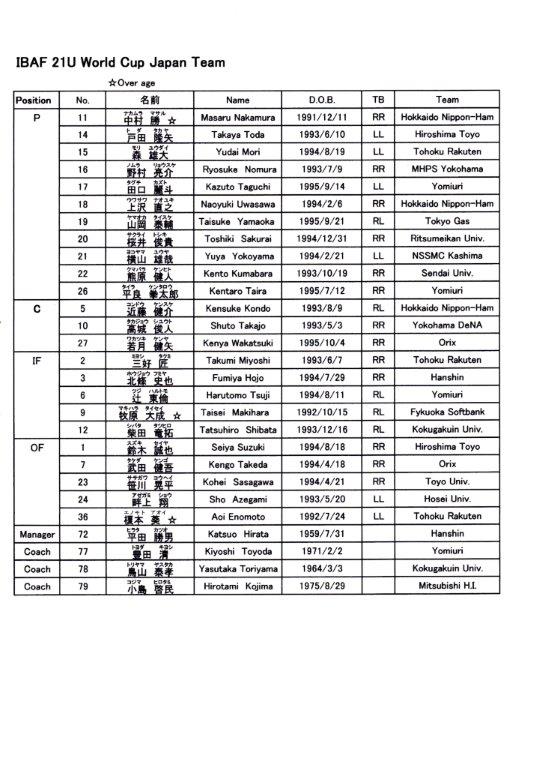