The idea of the game is for you to be a part of the toss and catch by Japanese baseball greats including Shigeo Nagashima, Sadaharu Oh, Hideo Nomo and Hideki Matsui, as well as film and TV celebrities on the website which has been visited by about 700,000 fans already.

This is how it works.

1. Film a video of your catch and throw and post it on Twitter
2. Connect the Twitter with the web site, URL：http://catch-ball.net/
3. Drag your video next to the star of your choice and press “Confirm”
4. After a few minutes, you can watch a special video featuring you among the stars 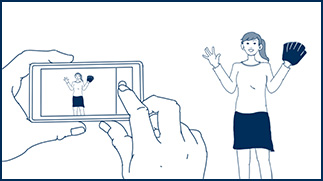